On Halloween 2008 while reading Fark.com I came across the annual Halloween scary story contest. I had some scary things happen in my past so I figured why not. I recounted an incident that happened to me many years before that night. Turns out I won the contest. While winning the story was fun I knew it wasn’t a recognition any great creative genius on my part, I just wrote down what happened. If anything, the creativity award goes to the group of whackos I came across that day.

Here is the original story posted on Fark

That day was July 21st, 1989. At the time I was a Marine Corps Lance Corporal stationed at the Marine Corps base at Twentynine Palms, CA. I had to drive to Albuquerque, NM and when I looked at the map it seemed much quicker to cut across Wonder Valley and through Amboy to I-40 rather than go down to Palm Springs, across and up the 15 to Barstow to pick up I-40. Being a Marine I naturally went for the shortest distance, score one for being efficient.

When I first arrived to the Twentynine Palms base they gathered the new arrivals into a room and gave us the talk. Don’t fuck up. Don’t do this or that. Stay out of this biker bar in town. Stay away from the drugged out desert chicks. Basic stay out of trouble stuff. They also told us to stay out of Amboy, not to even venture in that direction. My first thought was “wait, we’re Marines, we’re invincible”. Yeah, I was green and still drunk on the Kool-Aid. They told us scary stories about people being killed, found dead along the road, going missing, etc. They even told of us nighttime torchlight precessions that had been seen my some Marine units practicing night operations near the border of the base closest to the valley where Amboy was located. Devil worshipers, crazies, etc.

As I planned my trip to Albuquerque all of this was going through my mind and I thought “fuck it, who would know”? Plus I would be the middle of the day, nothing bad happens in the middle of the day. Yeah, so much for that theory as the trip would later prove. So I planned to take the Amboy route. On the day of my drive I thought I would bring my pistol, a Ruger P-85 9mm and a full magazine just in case. When I came across the ambush later that day it was all very surreal and everything moved kind of fast. I do remember thinking about the pistol and then realizing it wasn’t enough. When everything unfolded I remembered realizing that 14 rounds, even if I didn’t miss once, was not enough. There were that many people that popped out onto the road. That day I was lucky. I didn’t befall whatever plan those lunatics had that day. The whole thing moved fast and yet it seemed like forever that I was sitting there idling in the car, looking at the bodies and the Fiero and thinking W.T.F?!? Driving past the bodies felt like slow motion even though I was moving quick in first gear and by the time I passed the Fiero and looked in the mirror and saw the 20 or so people stepping out on to the road I hauled ass to I-40 so fast that I’m surprised I didn’t overshoot the onramp.

So now it is Halloween, 2013. I’ve been somewhat curious to go back and see the place after 24 years. To find the spot where it happened. Last weekend I packed my jeep with water, jerky, cigars, a handgun, rifle and lots of ammunition and decided to drive back and see it again. I didn’t really think those lunatics were still hiding in the bushes but I didn’t think they’d be there the first time and I wasn’t going to get caught unprepared again. That isn’t a feeling you want to experience twice.

That feeling, the whole premise behind the “scary story” concept. This story was scary to me not just because it happened but because it didn’t require any belief in the supernatural. Ghost stories, demons, vampires and all of that isn’t as scary to me as broken human beings. Real people who for some reason step outside of the social agreement we all have and behave in shocking, unthinkable ways. I estimated there were 20-25 people between the two laying in the road and the ones that jumped out behind my car. That was 20-25 people who all agreed to do something really fucked up to someone, to me. I doubt they were going to sing the Coca-Cola Christmas teach the world to sing song or try and sell me girl scout cookies. To this day I wonder what they had planned. What if I had gotten out of the car? There was a woman laying in the road and it was possible that my inner Marine superman-complex would have kicked in and gotten out of the car to check on the unfortunate civilians in need of help. And then what? Tortured? Chopped up into bits? And what is even weirder to imagine is that unless unknown to me God or Cthulhu or Buddy Jesus decided to smite them those 20-25 people are still walking around somewhere doing something. No two ways about it, people are freakin’ scary. Scarier than ghost stories or sparkle fairy vampires or little green men in spaceships.

So 24 years later I drove from San Diego, CA to Amboy, CA and visited the spot where the story took place 24 years ago. I’m older and scruffier than I was back then. I was also more on guard this time, not to mention better armed. I could’ve held out for 3-4 days in a World War Z movie scenario this time. 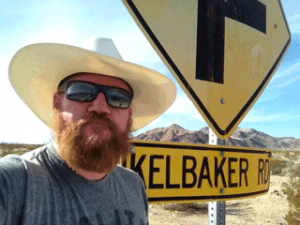 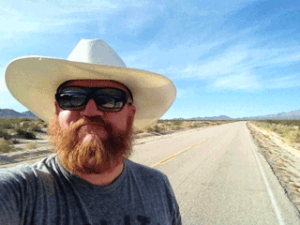 At the ambush spot. Approx 1/3rd the distance between Route 66 and I-40 on Kelbaker Road.

This is a Google Maps zoom of the spot. It is northbound on Kelbaker. The ambush was just past the rock formation on the left, closest to the roadside. 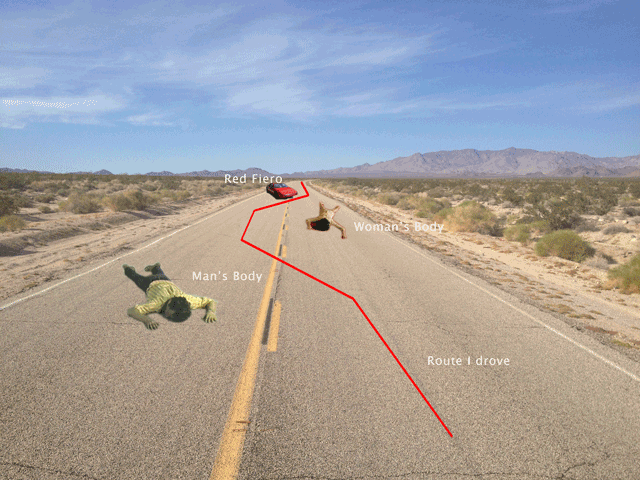 Ambush scene. Red marks the path I drove to get past the two people laying in the road and the red Fiero. Pardon my lack of Photoshop skills, I am no Yammering Splat Vector.

I didn’t photoshop in the scattered clothing on the road and the suitcase. Like I said, I’m no Yammering Splat Vector and this is about as good as I get in PS.

The high desert can be a freaky place. It is beautiful and fun to play in but it has its own kind of weird.

Speaking of weird, while on this trip I stumbled upon something a little odd. Two white marble 6ft tall Chinese Foo Dog statues standing 100 yards apart in the middle.of.nowhere. Out front of Mann’s Chinese Theatre or a restaurant sure but in the middle of no place? With nothing else around? The tinfoil part of me decided that this is where the Chinese Army plans to setup a forward operating base when they get tired of our financial bullshit and invade America. What ever these foo dog guardian lion statues are doing there is a mystery and may become another story.

Thank you for reading. If I can offer one small bit of advice, listen to your gut or inner voice. Have a healthy amount of skepticism and keep a little bit of your guard up. If I hadn’t that day I may not be alive today.