The yin and yang of tradeshow marketing

Tradeshows and conventions. I have been to more of them than I can attempt to count. I’ve been an attendee and exhibitor and after 20 years of being at these events you end up seeing just about everything. Being an exhibitor, the people that have the booths displaying stuff, it makes it interesting to be an attendee. I look at the products in the various exhibitor booths. I am subjected to their enticements and giveaways that they use to try and draw me into their booth as a potential customer. Since I am an exhibitor at other tradeshows I find myself looking at the enticements others use and try to determine what works well and what doesn’t.

First, spare me the misogynist rant. It is common knowledge that sex and scandal sells. What could be a better blend of those two concepts than a scantily clad woman promoting tech gear to a predominantly male attendee crowd in a country that really doesn’t care about pushing boundaries? In the local culture they are practically celebrities. They draw crowds of local guys that have little to do with the show. They have cameras that look like bazookas and they crowd around these girls to take tons of photos. Bottom line, it works. I stopped at their booth. I really didn’t have a choice since the crowd of paparazzi made it impossible to pass by. We have “booth babes” here in the States but it tends to be done more tastefully. We add some subtlety. In Asia, all bets are off as is quite a bit of clothing. In the end, this is the yin, it works, like it or not. 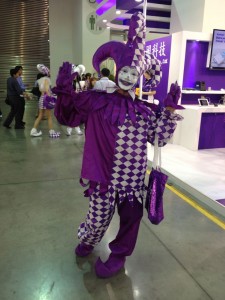 Yes, a clown. The yang. Let me start by saying this was a rather guttural encounter for me. I’ll be honest. I wanted to shoot this clown. I mean I actually considered what kind of gun to use. I am not clown phobic by any means. At the same time I would consider running over clowns with a dump truck to be a decent plot line for a summer comedy. This is the yang of marketing because driving potential customers away is a big time fail. Worse yet, the marketing genius that orchestrated this travesty gave the clown a rather loud squeaky toy to draw attention. This is good only in the event there is a blind sniper in the room.

I’d prefer PowerPoint over the clown, that is saying a lot.

In case you are wondering, the clown is alive. I didn’t have the time to construct the giant steampunk gears, chutes and marbles mousetrap of death that would have been befitting.

legal disclaimer: I do not engage in or endorse physical violence or gun violence in any way. This post was tagged as #comedy and should be viewed as such. This disclaimer exists for those select people that are so freaking uptight that they take everything literally and lack the brain power to fuel a healthy sense of humor.